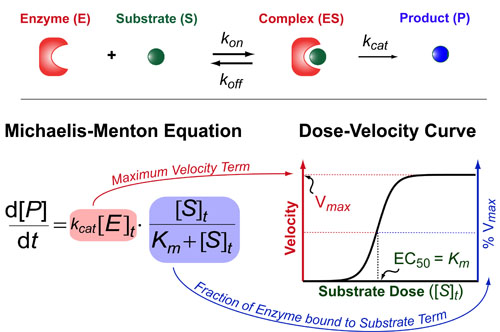 There are two parts to the Michaelis-Menton Equation. First, the maximum velocity term ([V]max) which is equal to kcat[E]t. This term represents the maximum rate at which the enzyme can produce product (basically when the enzyme is saturated with substrate). Second, we have a fractional term which describes the shape of the dose-velocity curve in response to increasing concentrations of substrate. If you data is normalized to 100% then this fractional term is usually sufficient to describe your data.

On limitation of the Michaelis-Menton is that is only works when the receptor concentration is much lower than the Michaelis-constant (i.e. [R]t << Km). While this is often true experimentally (when very low concentrations of enzymes are ultilized), it is typically not true in vivo and a more general, quadratic-equation must be used as is described in a previous post: Understanding Ligand-Receptor Dose-Response Curves.

This entry was posted in Biochemistry, Biology, Math, Models. Bookmark the permalink.