A Model of Tumor Development

Posted on May 7, 2017 | Comments Off on A Model of Tumor Development 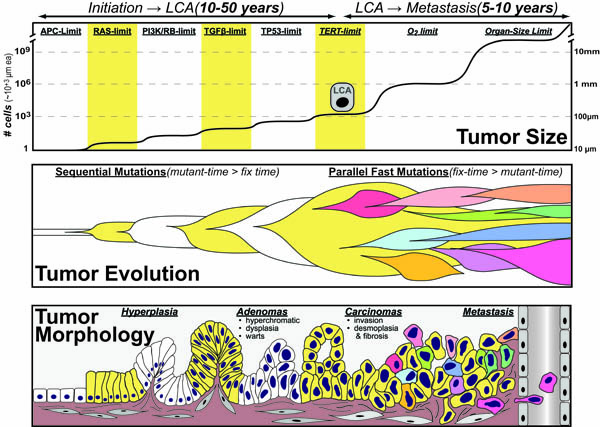 Tumors develop in two distinct stages: (1) Initiation to Last-Common-Ancestor(LCA) where 6-8 “driver-mutations” occur sequentially over 10-50 years and (2) LCA to Metastasis where mutations occur more rapidly in parallel. In the first phase, mutations occur slowly and pierce 6-8 barriers to unrestrained growth by “hot-wiring” pro-growth pathways and then “shorting-out” pro-death pathways . In the second phase, genomic instability creates a large-heterogeneous-population that is well-equipped to compete against bigger-picture-limitations such as oxygen-availability, tissue-size, attacking immune cells and chemotherapies.

In the graphic above, we try to combine 3 common visualizations for tumor development into one unified-conceptual image. This graphic can be thought of as conceptual-model of Chapter 11 of Weinberg’s Biology of Cancer.1 The top-graphic on the step-wise nature of early-tumor growth was inspired by a article in Nature Reviews Cancer and some early models of tumor growth kinetics.2-5 The middle and bottom graphics attempt to capture parallel “internal” changes in tumor heterogeneity (middle) and morphology (bottom) by color-coding different clones within the famous “Vogelgram.” The middle-graphic was inspired by the mathematical modeling of Martin Nowak along with phylogenetic work by several groups on several cancers.6-9

This work by Eugene Douglass is licensed under a Creative Commons Attribution-NonCommercial-ShareAlike 3.0 Unported License.

This entry was posted in Cancer, Diseases. Bookmark the permalink.