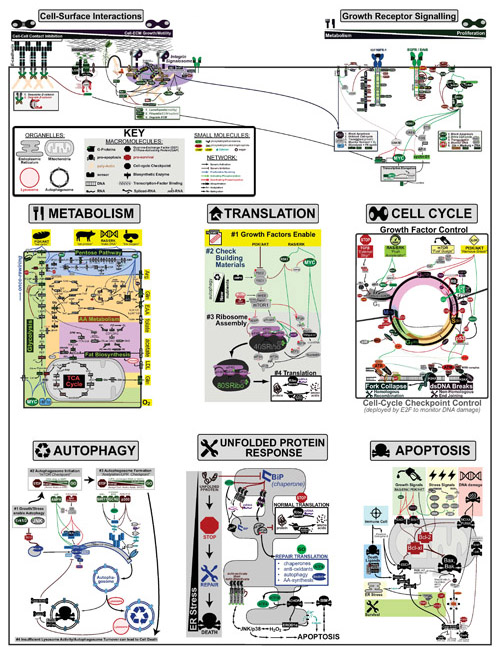 Cancer is a complex disease that is defined by at least 10 different “Hallmarks” that reflect mutation or epigenetically-driven reprogramming of normal cellular circuits. Over the past year, I have compiled a document that attempts to combine what’s known about the intra-cellular network that underlie these “Cancer Hallmarks.” This project started out as a single-page infographic but has since expanded into the 2 foot x 3 foot poster pictured above.

My goal was (and is) to create a comprehensive network map that is conceptually accessible to help me (and now others) think about the “big picture” of cancer networks. Of course, this poster is a work in progress and I will continue to update it over time. Below, I give a brief conceptual description of each module I have used to organize this “Canonical” Cancer-Network Map.

This module is drawn the emphasize the competing effects that other cells and extracellular matrix(ECM) have on a cancer cell’s decisions to proliferate and move. In general, Cell-Cell Adhesion through E-cadherin are anti-proliferative, which makes sense as neighbors who are “bumping into each other” probably don’t have room to “build an expansion on their house.” Conversely, Cell-ECM Interactions through the integrins can be pro-proliferative through growth-hormone-like signalling through a multicomponent complex I call the “Integrin Signalosome.”

This module is drawn the emphasize the different signalling emphasis of the different growth hormone receptors Insulin-like Growth Factor Receptor (IGFR) and Epidermal Growth Factor Receptor(EGFR). While both receptors are capable of signalling through the Phosphoinositide 3-kinase(PI3K) and RAS/RAF/MEK Pathways they vary in their efficiency of inducing each. For example, through the scaffold protein IRS1, IGFR is more effective at inducing PI3K signalling relative to EGFR which is more effective at inducing RAS/RAF/MEK signalling. Though these pathways are related they have distinct functional roles.

This module is drawn to further divide metabolic enzymatic “assembly lines” into 5 sub-modules:

In addition, signalling inputs that can rewire metabolism are highlighted in yellow at the top and nutrient inputs are highlighted in yellow on the right hand side (EAA: Essential Amino Acids; LDL: low density lipoprotein). Genes and pathways that are upregulated in cancer have green titles (e.g. Glycolysis, Pentose Pathway, AA Metabolism, Fat Biosynthesis) while those that are downregulated in cancer have red titles (e.g. TCA cycle). Finally, if the rate-determining step (RDS) is known for a pathway it’s gene is marked by a “RDS.”

This module is drawn to emphasize the stepwise process of global translation initiation using a building analogy where:

This module is drawn to emphasize the cyclic nature of the cell cycle that is divided into 4 phases: G1 (Growth #1 ~12 hours), S (Synthesis ~6 hours), G2 (Growth #2 ~4 hours), M (Mitosis ~1 hours). The top half of the cycle is controlled by growth factors while the bottom half if controlled by “cell-cycle checkpoint machinery” which monitors DNA-damage during the process of cell-division.

I have used an automobile analogy to conceptually illustrate the roles of different growth-factor pathways in controlling the initiation of the cell cycle:

This module is drawn to emphasize the stepwise process of autophagy where:

Cell-suicide, via apoptosis, is a complex process affected by diverse signals including: growth factors, stress, DNA damage and the immune system. In general, Bax and Bak are the “door” at the “gates of hell” (i.e. mitocondrial cell contents) that unleash death upon a cell. Anti-apoptotic proteins such as BCL-xl and BCL-2 can be thought of as the “lock on that door”.
Extending the door analogy to each of the signaling cues:

This work by Eugene Douglass is licensed under a Creative Commons Attribution-NonCommercial-ShareAlike 3.0 Unported License.

This entry was posted in Systems Biology. Bookmark the permalink.

2 responses to “A ‘Canonical’ Cancer-Network Map”