How do Experimentalists use Mathematical Models?

Posted on April 28, 2013 | Comments Off on How do Experimentalists use Mathematical Models? 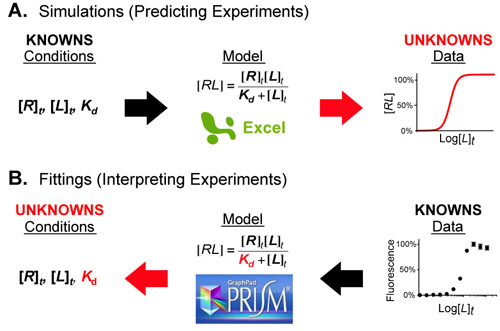 Figure 1.  Mathematical models act as a bridge between the conditions of an experimental system and its behavior (the data). When a portion of either is unknown you can combine the knowns (black arrows) and calculate the unknowns (red arrows) using simple software packages such as Excel or Prism.

Mathematical models are equations (or systems of equations) that allow one the connect the conditions of a system/experiment with its predicted behavior/experimental data. Figure 1 shows an example of this where the Langmuir-Hill equation (in the center) connects the conditions (left) of a fluorescence binding assay with the dose-response curve (right) that results from conducting the experiment.

This “bridging” generally occurs in one of two directions:

This entry was posted in Models. Bookmark the permalink.