Posted on November 9, 2012 | Comments Off on A Single pKa Chart: Visualizing Reactivity Trends 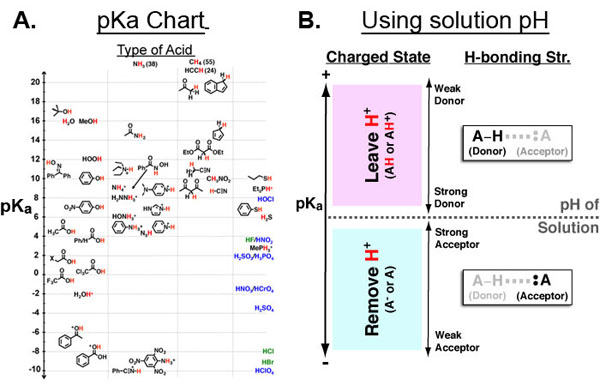 The pKa value of a chemical functional group (Figure 1A) is very useful because it can directly give you the approximate charged state of that functional group (in the context of drugs, proteins, membranes, DNA, etc.) at a specific solution pH.  As such, the pKa is critical to an intuitive understanding of electrostatics in chemical and biological contexts.

This rule of thumb is quantified by the Henderson Hasselbalch equation:

In addition to giving information about the charged state of a small molecules and macromolecules the pKa can serve as a metric for the relative hydrogen bonding strength of different functional groups as donors (in the protonated state pH < pKa) or acceptors (in the deprotonated state pH > pKa) which is also improtant throughout the chemical and biological sciences (e.g. protein folding, chemical catalysis, etc.)

This work was inspired by the Professor Evans’ pKa tables which can be found on the Evans Group Page at Harvard.

This entry was posted in Chemistry, Inorganic, Organic, Physical Chemistry. Bookmark the permalink.