What do “PEG-linkers” do to drugs? 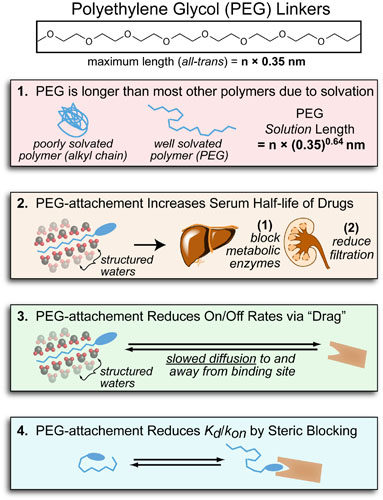 Where synthetic chemistry has given us many molecules that bind (and inhibit) many different proteins, chemical biology endeavors to “attach” new function to these “classical” drugs. Examples of chemical biological applications include: (1) attaching toxins or imaging agents for targeted deliver or (2) using multivalency to improve a drug’s potency. Unfortunately in order to “attach” new function to a drug you need to use a “linker” which is long and inert so it doesn’t interfer with “binding” or the new “function”. The most common linker material used in chemical biology and pharmacology is polyethylene glycol or PEG (pictured above) which is both long and inert but still impacts the properties of the drugs it is attached to(see figure above):

This entry was posted in Chemical Biology, Chemistry. Bookmark the permalink.