Posted on July 20, 2014 | Comments Off on Understanding Reactivity with Hard-Soft Acid-Base Theory 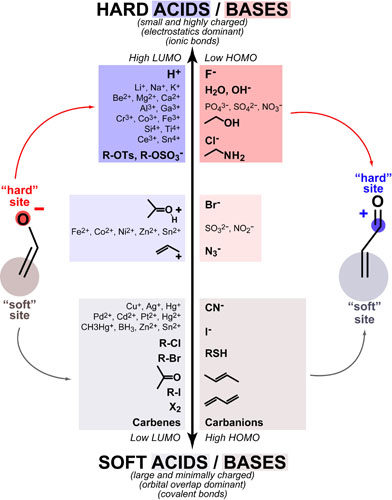 Hard-Soft Acid-Base(HSAB) theory one of the most useful rules of thumb for explaining and predicting chemical reactivity trends. Hard molecules tend to be small/non-polarizable and charged while soft molecules tend to be large/polarizable and uncharged. Both acids/electrophiles and bases/nucleophiles can be hard and soft and the defining reactivity rule of HSAB theory is:

HSAB REGIOSELECTIVITY:
These rules are especially useful for rationalizing regioselectivity in ambident molecules (molecules that have more than one reactive site) such as enols and enones (see figure above):

KLOPMAN EQUATION EXPLAINS HSAB THEORY:
Finally, though these rules were originally derived empirically, there is quantum mechanical explanation for these trends in the Klopman equation:

This equation shows how chemical reactivity is defined by two terms: (1) an electrostatics (ionic) term and (2) orbital (covalent) term. In general:

This entry was posted in Chemistry, Inorganic, Math, Models, Organic. Bookmark the permalink.