The Maximal “Rate” of Evolution

Posted on August 1, 2015 | Comments Off on The Maximal “Rate” of Evolution 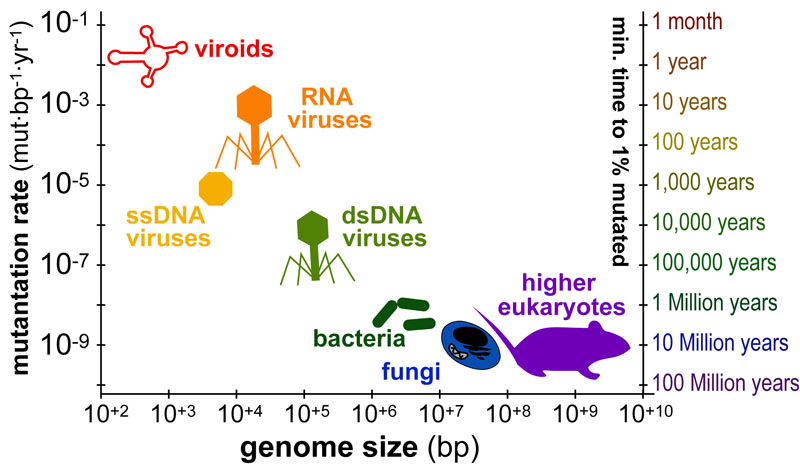 The timescales over which organisms “mutate” or “evolve” varies dramatically from months(viruses) to millions of years(animals). The figure above plots the average genome size in base-pairs (x-axis) versus the average mutation-rate(y-axis) for various organisms. In addition, a second y-axis (“minimum time to 1% mutation”) illustrate approximate timescales corresponding to each rate.

The “mutation rate” defines genetic changes in individuals while “substitution rate” accounts for genetic changes within a population. These are related as the “mutation rate” sets the maximum “substitution rate” which is only observed in “synonymous/neutral mutations” (where mutations have no affect of the fitness of the organism). Typically, “non-synonymous mutations” occur 10x faster within protein-coding-DNA and 100x slower within ribosomal-RNA-coding-DNA.

As mutations accumulate over time, not all mutations will result in changes in DNA sequence. This is due to the fact there is a 25% chance a a mutated base (“A” in figure above) will be mutated back to its original base. This sets a ~75% limit on how “different” any two sequences of DNA can ever be. The Jukes-Cantor Model is the simplest model to account for this effect and allows investigators to convert “number of differences in DNA sequence” (which can be directly measured) to “number of mutations in DNA sequence” (which cannot be directly measured). Therefore “differences in DNA sequence” can be converted to “mutations”(Jukes-Cantor Model) that can be converted to “evolutionary time” (scaling factor).

This entry was posted in Biology, Models, Molecular Biology. Bookmark the permalink.