Posted on September 5, 2015 | Comments Off on Receptor # Threshold for Cell-Cell Adhesion

How do two cells that can adhere, decide whether or not they should adhere? Typically, potentially adherent cells become adherent by increasing their adherence-receptor expression levels (R1/R2) past a certain “threshold” or “EC50” (see figure above). A classic 1984 paper defined this EC50 as a function of R1/R2‘s binding constant Ksoln as illustrated above for two average eukaryotic cells.1,2 This equilibrium model for cellular adhesion is described in more detail below. 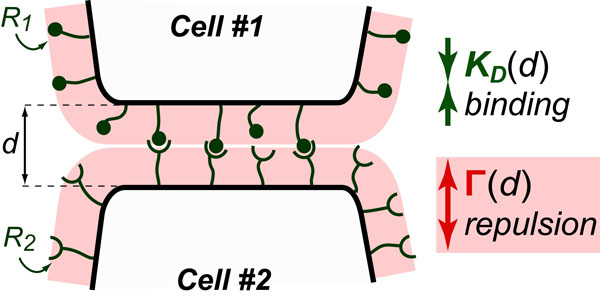 This model is formulated on the idea that cell-cell adhesion is determined by a competition between two opposing forces:

These opposing forces can be defined using the equations below which are defined and discussed in detail in reference #1.


QUADRATIC MODEL FOR BRIDGE NUMBER
Combining these equations with conservation of mass and the law of mass action the authors of reference #1 were able to model the number of bridges between cells at equilibrium as a quadratic function below:

Solving for the EC50 and then plugging in the physically reasonable values of each parameter listed above (for typical eukaryotic cells) we were able to obtain the below expression which enables one to estimate the Receptor threshold from a dissociation constant determined in free solution (Ksoln):

This entry was posted in Biology, Biophysics, Models. Bookmark the permalink.