Posted on November 8, 2015 | Comments Off on Kinetics #6: Pulse-Chase Experiments

Examples of common pulse-chase experiments include:

Assuming pseudo-first order kinetics, bio-synthetic pathways are generally analytically solvable as detailed reference 1. Unfortunately, these models can become rather complex as the pathways become larger which can make it difficult to get an intuitive feel for the dynamics of such processes. If one further assumes that each step in the pathway has a similar psuedo-first order rate (a somewhat reasonable assumption as large rate differences would cause inefficiency in the “assembly-line”) the mathematics simplifies dramatically for any sequential pathway to the equations below (where k1 is the pseudo-first order rate constant and Pn is the nth intermediate) : 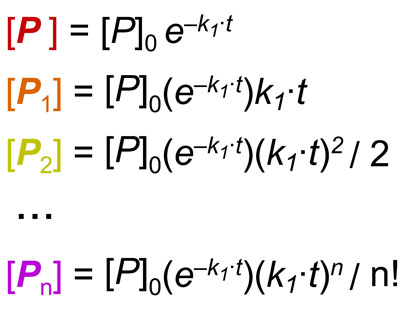 Based on the equations above, in general, the pulse of each nth intermediate will occur at approximately n/k1.

This entry was posted in Biochemistry, Models. Bookmark the permalink.