Posted on October 18, 2014 | Comments Off on A Complete Aerobic Model of Marathon Performance

The equation above is one of the simplest and most accurate predictors of marathon performance (having been shown to account for ~70% of the variability in individual marathon performance).1 In the figures below I delve more deeply into each of these terms to gain a better understanding of the molecular determinants of racing performance. 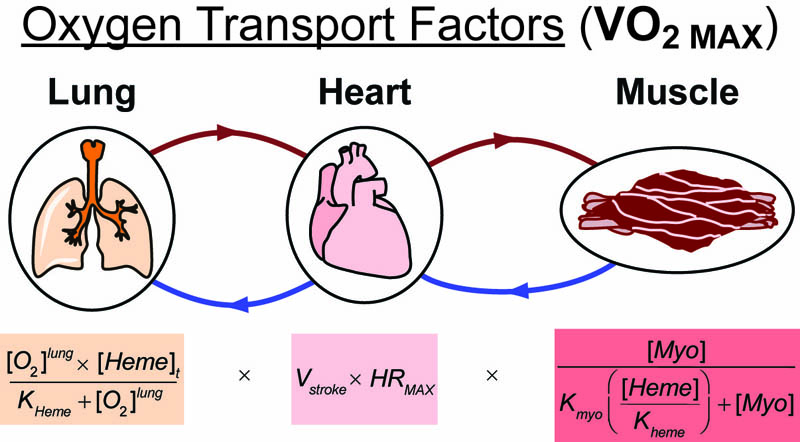 VO2max is the maximum oxygen transport by the cardiovascular system in moles of oxygen per second.

RE is running economy or the conversion efficiency of turning a mole of oxygen into a meter of work. For aerobic muscle fibers (“slow-twitch”) oxygen delivery is the rate-limiting-step and so these steps don’t need to be explicitly modeled but can be estimated as approximate conversion factors. Later posts will explicitly model each of these steps which is very important for modeling race performance for distances shorter than a marathon.

Finally, LT is the lactic threshold or a fractional term that scales down the velocity at VO2max (i.e. RE x VO2max) to the velocity at which lactic acid does not accumulate. This term is essentially a fudge factor which allows us to assume that racing performance is only determined by the aerobic (slow-twitch) muscle fibers. While this oversimplification is ok for the marathon it breaks down for shorter distance races which involve more fast-twitch muscle fiber recruitment. Later posts will examine models that explicitely treat the fast-twitch contribution where the conversion of ATP to work forms the rate-limiting-step (vs slow-twitch where oxygen transport constitutes the rate-limiting-step)

This entry was posted in Math, Models, Running. Bookmark the permalink.